The prices of many cryptocurrencies are still in the basement compared to the record values in May 2021. Nevertheless, investors are hesitant to buy Bitcoin or altcoins at the moment. The fear of further corrections seems great. Thus, the trading volume remains low, and prices move sideways.

But isn’t now a good time to buy? After all, many altcoins are currently about half the price compared to the highs just under two months ago. The analysis today focuses on Binance Coin (BNB) and Cardano (ADA), two of the most successful cryptocurrencies in the bull market 2020/2021. Which of the two investments promise the better returns in the short, medium and long term?

In the past twelve months, both the purchase of Cardano and an investment in Binance Coin have paid off similarly for investors.

For example, Cardano’s growth is a good 1,400 percent within a year, as figures from CoinCodex show. However, the price of Binance Coin has even risen by almost 1,800 percent in the same period. If you invested in BNB for 1000 euros exactly one year ago, you can now look forward to around 18,000 euros in your account. The same investment in Cardano would have brought about 4,000 euros less return.

By the way, both altcoins score significantly better than an investment in Bitcoin or Ethereum. Thus, 1,000 euros invested in Bitcoin a year ago would mean the equivalent of 2,660 euros today. With Ethereum, it would be almost 8,730 euros.

However, the two altcoins have brought even significantly higher profits to investors who sold before the current correction. Because two months ago Binance Coin was still trading at just under 700 dollars and thus far more than 100 percent above the current level of just under 300 dollars. Cardano, too, is a long way from the highs of around $ 2.5 with a quote of $ 1.4 at the moment.

From the 1,000 euros mentioned, investors could easily make a few thousands of euros more if they found a good time to sell.

Rising Triangle could soon catapult BNB and ADA to the top

Both altcoins have already recovered significantly from the lows of the correction. ADA / USD reached lows of around $ 1 on June 22 and is currently trading 40 percent higher. Binance Coin has also risen by 37 percent against the low of around 215 dollars in May.

Nevertheless, prices remain low compared to May prices and could still offer investors a favorable entry point. Provided that the market soon records a bullish turnaround. For example, BNB is still around 57 percent below the best value and at Cardano it is slightly less at just under 44 percent.

Setting short-term price targets is relatively difficult without a clear direction given the current sideways movements. The altcoins are located here in some dependence on the Bitcoin price. But the lead currency also seems to be moving somewhat disoriented between $ 30,000 and $ 35,000.

Technical analysis of ADA / USD shows a strong ascending support line on the 1-hour chart, which the price has already repeatedly confirmed as support in the area of $ 1, $ 1.29 and $ 1.37. In addition, two potential price patterns can be identified.

An ascending triangle with a resistance line in the area of 1,5 dollars, according to the probabilities of technical analysis, could be a bullish scenario for Cardano. Should ADA / USD break this mark, the technical price target would be in the $ 2 range. A successful trade of this breakout promises investors an increase of more than 30 percent.

At the same time, technical analysis shows the pattern of a symmetrical triangle. With this formation, the direction of the trend is less predictable, as with an ascending triangle. However, since ADA / USD has so far broken the potential resistance line upwards in a fake-out, a counter-move and a strength correction below the support line may be more likely. Should this happen, the technical price target would be around $ 0.9.

The chart analysis of Binance Coin shows the identical price patterns. The bullish price target of the ascending triangle is around $ 405. This would also correspond to an increase of more than 30 percent compared to the current price. A break down, on the other hand, could bring BNB/USD back to price regions of $ 200.

Should the altcoins manage the turnaround, analysts trust both Cardano and Binance Coin to achieve significant price increases in the coming months and years.

For 2021, analysts at the Economy Forecast Agency expect a year-end price of just above $ 1,000 for the Binance Coin. Compared to the current level of just under $ 300, that would equate to growth of more than 230 percent in the remaining 5 months of the year.

And this, according to analysts, is far from reaching the top. For the years 2022 to 2023, they consider prices of 2000 dollars per BNB possible. Only in the following period could the price settle after a correction in the range of 1,700 dollars.

The analysts of Wallet Investor, on the other hand, no longer trust BNB with new price records this year. In their estimation, a level around 700 dollars could not be reached again until 2022 at the earliest.

Also Cardano many analysts trust a price jump this year. Thus, the experts of Coin Price Forecast consider 4 dollars to be possible by the end of December 2021. Against the current price of $ 1.4, that would mean 185 percent growth. As early as next year, according to analysts, ADA/USD could even crack the mark of $ 10. By the year 2030, market researchers even expect a price of more than 100 dollars for ADA/USD, which is about 50 times as much as at present.

Somewhat more cautious is the assessment of analysts from Wallet Investor. The price target for the end of 2021 is around 2.5 dollars and thus more than 80 percent above the current level. By 2028, the price of ADA/USD, in their estimation, could climb above $ 6. This represents growth of almost 330 percent compared to today’s price. 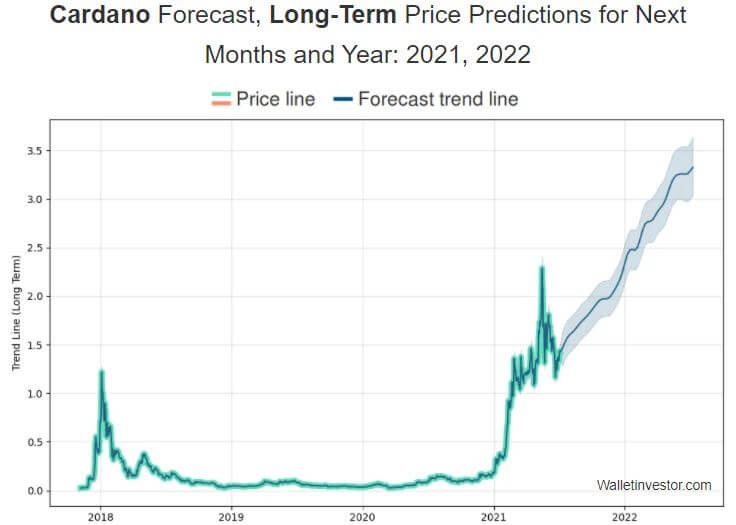 The two altcoins are both performing very well among analysts and price forecasts are similarly bullish. If the assessments are correct, an investment in Binance Coin as well as the purchase of Cardano at the currently relatively low prices is worthwhile.

Binance-new trouble? The exchange does not have a license for the Cayman Islands

Rally in June? Professional Trader Reveals Five Altcoins That Might Be Worth It