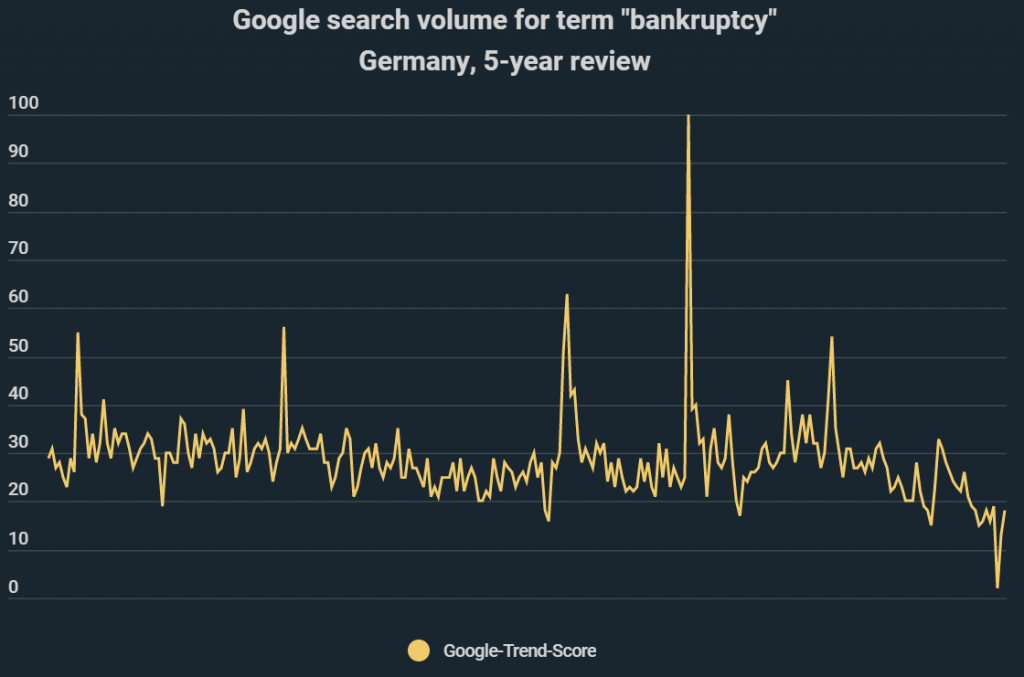 Significantly fewer private insolvencies were filed in Germany in 2020, with the number falling by around a third to 41,800. The number of newly concluded credit agreements also fell by 7.4% compared to the previous year, according to a new infographic from Kryptoszene.de.

97.9% of consumer loans were properly repaid during the Corona crisis year 2020, as shown by data from a ” Schufa“ survey. It also revealed that the credit agency had recorded a negative entry for 9% of all German citizens. However, the figure is significantly lower in Baden-Württemberg (7.1%) and Bavaria (6.6%).

Meanwhile, the infographic indicates that fewer and fewer German citizens are searching for “insolvency” on Google. In spring 2021, the Google Trend Score, a measure of the relative search volume, was at its lowest level in five years.

There were a total of 75,044 insolvencies in the Federal Republic last year – which was a significant decrease compared to the previous years. Some believe that this is mainly due to the suspension of the obligation to file for insolvency. Yet this is contradicted by the low number of searches on Google.

Overall, it seems that Germany’s citizens are coping well with the pandemic, at least in financial terms. Few consumer loans are being taken out, the existing ones are being duly repaid in 97.9% of cases, and there is also a positive trend in terms of insolvencies. The situation with regard to government debt is markedly different: it climbed from €1,899 billion in 2019 to €2,068 billion in 2020.

Bitcoin Investors Beware: Why BTC / USD Could Fall Below $ 30,000 on Sunday