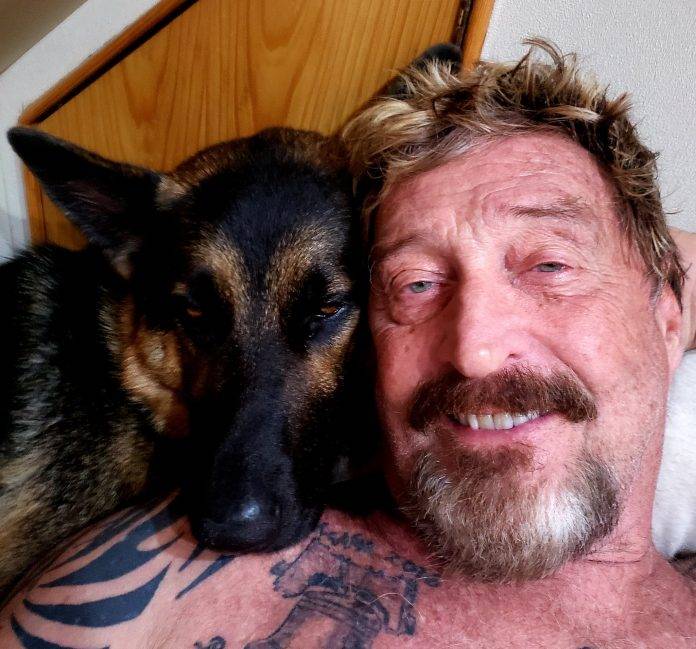 Bitter end to a legend: software entrepreneur John McAfee has killed himself in a Catalan prison. A day earlier, his extradition to the United States was decided, where he was to be charged with tax evasion.

The news spread like wildfire within the crypto community in the early hours of yesterday: tech entrepreneur and self-made millionaire John McAfee, inventor of the famous antivirus software, is dead. Suicide-hanged in his prison cell in Catalonia.

First, the Spanish newspaper El Mundo had reported exclusively. But in the meantime, the confirmation came from the Spanish Ministry of Justice:

“Everything indicates that it could be a death by suicide.“

The crypto community, otherwise not embarrassed by expressions of opinion, is shocked. The 75-year-old McAfee was considered one of the most dazzling personalities in the industry, was at times a kind of “crypto grandfather”for many due to his old age alone. Hundreds of users take to Twitter to share anecdotes or videos showing the pugnacious programmer in action. And” in action ” was McAfee always felt.

Still in freedom, hardly a day passed without a Twitter message from the ex-yoga teacher. Once he sat at Pianosometimes he cuddled in bed with his dogs, sometimes he posed with heavy weapons, strong drinks or hard drugs (here according to his own statement, he is celebrating with his “Bible reading group”). In his videos, he also repeatedly addressed things such as abuse of power, the “Deep State” or existential philosophical questions. Many may also be aware of his claim to have had sex with a whale (one should Google it quietly, he once let it be known). John McAfee was everything, just not boring.

A life on the run

According to his own statement, the 47-time father lived for years on the run – on the run from the US authorities. Sometimes here, sometimes there-sometimes even on board a mega yacht (Netflix tip :the documentary “Gringo-The Dangerous Life Of John McAfee”). McAfee and his wife Janice, it seemed, lived a carefree luxury life under blue skies. Nothing, not even the long arm of the US law enforcement agencies, apparently could harm him. And then the handcuffs clicked: on October 5, 2020, McAfee was arrested in Spain at the request of the US criminal authorities.

Gone was the romantic-transfigured life on the run: in October 2020 McAfee came to a Catalan prison – and thus began the last chapter of his life. In March 2021, McAfee, a consultant and a bodyguard were indicted on seven counts (including cryptocurrency fraud and conspiracy to launder money). Suddenly, the tone of his tweets also changed. And radically. McAfee in April 2021:

“I have been imprisoned in Catalonia for almost 7 months. I don’t speak Catalan and little Spanish, so human contact is limited. There are no conversations – no escape from loneliness, from emptiness, from myself.

This was the most difficult time of my life.“

I have been imprisoned in Catalonia nearly 7 months. I speak no Catalan and little Spanish so human contact is limited. There are no entertainments – no escape from loneliness, from emptiness, from myself.

This has been the most trying period of my life.

“There is much sorrow in prison”

Or, one of his last tweets from June:

“In prison there is a lot of grief disguised as hostility.

Grief is clearly visible even in the most angry faces.

I am old and content with food and a bed, but for the young, prison is a horror – a reflection of the spirit of those who conceived it.“

There is much sorrow in prison, disguised as hostility.

The sorrow is plainly visible even in the most angry faces.

I’m old and content with food and a bed but for the young prison is a horror – a reflection of the minds of those who conceived them.

“I have a million followers, but I would be surprised if even 1% would bother to read my tweets.

The ramblings of an old man lost in an almost infinite Twitter verse-like tears in the rain.

As you might guess, I’m having a bad day.“

“I once had everything.

After countless processes and the access of the FED, I now have nothing.

But inside these prison bars, I’ve never felt so free.

The things that are believed to belong to you actually own you.“

And McAfee owned a lot. At times, his fortune was estimated at $ 100 million, although after the US housing crisis “only” four million dollars are said to have remained.

In addition to money laundering, US prosecutors accused McAfee of orchestrating a “pump-and-dump” scheme and promoting cryptocurrencies on Twitter in order to dump them to his followers. Many crypto investors may still remember his infamous “Coin of the day”tweets (later “Coin of the week”) for good or bad. But the millions allegedly taken are said to have vanished into thin air. This is emphasized by the “Iconoclast” (self-description McAfee) in a recent tweet, which he attached to his Twitter profile.

“The US believes that I hid crypto. I wish that was so, but it has dissolved through the many hands of Team McAfee (their faith is not required), and my remaining assets are all confiscated. My friends broke up for fear of a connection.

I don’t have anything left.

Nevertheless, I do not regret anything.“

Exactly seven days after this tweet, on June 23, 2021, the “Audiencia Nacional de España” decided to extradite the prominent detainee to the United States.

And John McAfee, “Lover of woman, adventure and mystery”, finally plunged into the very abyss into which he had looked so long before.

Within the crypto community, the news of McAfee’s suicide has sent shockwaves. Many remember their encounters with the British-American entrepreneur, share videos or quotes.

Even after his passing, McAfee manages to fascinate his followers. Many even speculate whether he may have faked his own death or even been killed. In an October 2020 tweet, he writes from prison:

“I am satisfied here. I have friends.

The food is good. It’s all right.

Know that if I hang myself, a la Epstein, it’s not my fault.“

The food is good. All is well.

Know that if I hang myself, a la Epstein, it will be no fault of mine.

In addition,: A short time after his alleged suicide became known, a picture was posted on McAfee’s official Instagram account-a simple “Q”. Fans of the software entrepreneur suspect that this could be a reference to “Q-Anon” – that is, the American person or group that has been spreading conspiracy theories on the Internet since 2017. Epstein, Q-Anon-ideal ingredients for hair-raising theories. In the meantime, McAfee’s Instagram profile has also been completely deleted-fueling speculation that third parties may be involved.

“Precisely because of the character of McAfee, I can not help but wonder if this is a 4D chess game and he is currently in a transport box traveling to another place on Earth.“

To fake one’s death to the whole world – it would be a masterly trick. And typical of McAfee.

Is it worth getting into the blockchain game?